Flares: Before and After 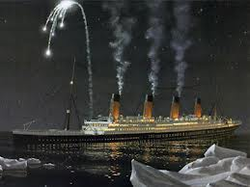 Before the Titanic, rockets and flares were not always interpreted as distress signals. Sometimes vessels would fire rockets (or flares) to signal their position to ships in the area.  Titanic was firing white flares, which were meant to signal distress which was misinterpreted by the officers of the Californian.  This was because distress rockets were to be fired at one minute intervals, but the rockets that Titanic fired were at random intervals.
After the sinking, the firing of rockets or flares was to be interpreted as a distress signal to nearby ships, as established by the British Board of Trade rules.
Had the Californian recognized Titanic's distress rockets, countless lives would have been saved.

The International Ice Patrol is an organization of vessels that patrol waters for ice and icebergs. After the Titanic disaster, the Revenue Cutter Service (US Coast Guard) was assigned to patrol the waters. It wasn't until the first International Convention for the Safety of Life at Sea that the U.S. officially undertook this obligation. It has been under the US Coast Guard ever since.
The International Ice Patrol is funded in part by the thirteen countries which voted for the organization to begin.  This has helped safe lives by protecting oceangoing vessels from dangerous ice and icebergs.
Other Pages: Safety Precautions: Then and Now
Radio Transmissions
Lifeboats and Lifevests
Design Flaws and Improvements