Lifeboats: Then and Now 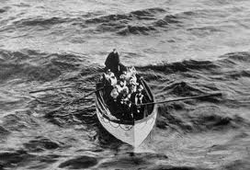 The number of lifeboats on the Titanic was dictated by the tonnage of the boat as determined by the Board of Trade. According to this rule, Titanic was only required to have 16 lifeboats but actually had 20.  Even so, there was not enough room on the boats for half of its passengers and crew.
Now, the number of lifeboats on a vessel is determined by the number of people aboard that vessel. This regulation was established by the Board of Trade after the sinking and insures that there is room for everyone on the lifeboats.
Also, lifeboat drills are mandatory in order to ensure safety. A lifeboat drill was skipped the day of the sinking due to a Sunday church service, which was the main cause of lifeboat confusion when the ship was sinking. 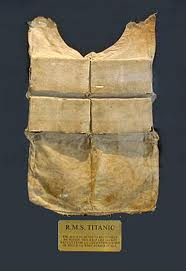 The Titanic provided life-vests for all of its passengers.   These  life-vests  were made of canvas and cork. They were flimsy in design and secured only by fabric strings.  As the Titanic sank,  many of the passengers who were unable to board lifeboats jumped off the railings or the sides of the ship. Due to the vest design, many jumpers were knocked unconscious by their life-vests. Many drowned, broke their necks, or died of hypothermia in the freezing waters.
After the tragedy, cork remained the main material for life-vests and it wasn't until after WWII that they were redesigned. It was the loss of the passengers wearing cork life-vests on the Titanic and other similar incidents  that motivated the improvement to the materials used. 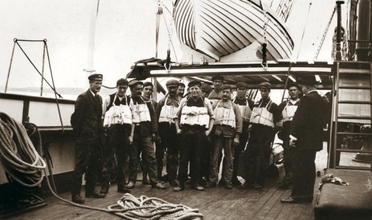 Passengers in life-vest inspection. This photo is from the album of a passenger (in the photo) who debarked the Titanic before the sinking.
Other Pages: Safety Precautions: Then and Now
Radio Transmissions
Flares and Ice Patrol
Design Flaws and Improvements