Titanic had 16 watertight compartments which were designed to keep the ship afloat in a collision. Titanic could stay afloat if any two of them were breached (or if the front four were breached). Unfortunately, when Titanic scraped the iceberg, it created a long gash in its hull opening six of the sixteen compartments.  It was the front six compartments that were breached, which made Titanic heavy with water weight at the front, causing it to sink faster. 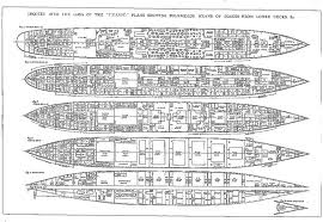 Titanic had nine decks. The topmost deck, the Boat Deck, housed lifeboats and was the launching point for them during the sinking. The other eight decks were separated for the three classes and crew accordingly.