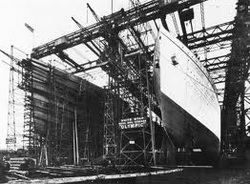 Titanic and Olympic during their construction
The Titanic had several major flaws: the height of the watertight compartments and the double hull on the bottom. After the Titanic, her sister ships the Olympic and Britannic were remodeled so their watertight compartments extended further up the ship and the double hull extended above the waterline.
If Titanic had a double hull, the iceberg would have likely caused less damage, causing Titanic to sink more slowly. Also, the watertight compartments that were opened were primarily in the front of the ship. As the compartments filled with water, the ship became heavy in the front and tipped forward. This made it difficult to launch and board lifeboats. If the weight had been distributed more evenly, more lives would have been saved.