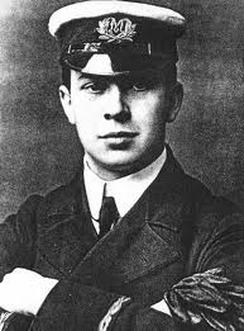 Senior Wireless Operator John Phillips
A ship, the Californian, was in Titanic's vicinity as it was sinking (closer than the Carpathia, the Titanic's rescuer).    Officers on this ship saw Titanic's distress rockets (see Flares and Ice Patrol page) and were being desperately hailed by the wireless operator on the Titanic. Unfortunately, none of Titanic's distress signals were received on the Californian because their wireless operator had gone to bed.

After the disaster, inquiries were made as to why the operator was not at his post.  This led to the Radio Act of 1912, established by the Board of Trade, which stated that there should be 24 hour monitoring of the wireless machines, secondary power supply for sending distress signals, and that ships were required to communicate with others in their area. One of the main mistakes during the night of the sinking was that the wireless operators on the Titanic ignored ice warnings because they were too busy sending personal messages of passengers. The Radio Act of 1912 made ship's news (ice warnings and distress signals) a priority over personal passenger messages.
Other Pages: Safety Precautions: Then and Now
Lifeboats and Lifevests
Flares and Ice Patrol
Design Flaws and Improvements